THE MONASTERIES AND THE HISTORY

Discover one of the most historical visits that can be made in Spain. A thousand years of history and cradle of Castilian

In addition to its history, the art that hides behind its walls and the dozens of legends that have grown throughout its more than one thousand years of history, the monasteries of San Millán de la Cogolla are a unique place in the world because they collect the first evidences of the birth of Castilian and Euskera languages in the famous “Glosas Emilianenes”, annotations in Romance in the margins of pages written in Latin, and for being the place of residence of the monk and first poet of known name in Castilian, Gonzalo de Berceo .

We believe that your experience at Hostería San Millán will be much more special if you know a little about the history of these monasteries where the hotel is located so on this page you will always have information so you do not miss anything during your stay.

A LITTLE HISTORY: WHO WAS SAN MILLÁN?

Millan was a pastor of the area who, at a very early age, felt the need to lead a hermit and penitent life, at which time he became a disciple of the hermit Felix. Years after this decision and having learned this type of “hermitic” life, he returns to his village to enter the Distercia mountains.

He spent forty-four years there in absolute solitude until the bishop calls him and orders the Parish of Santa Eulalia in his home town of Berceo. Finally he decides to return to his solitude.

He retires to the valley of Suso, and that is where his true story begins with the community of the faithful that is formed around his figure. This group of followers, after the death of Millán, founded the great monastery of San Millán de la Cogolla. Within its walls venerate the remains of the saint until they are transferred to the new Monastery of Yuso in 1076 where they have been resting almost a thousand years, to this day. 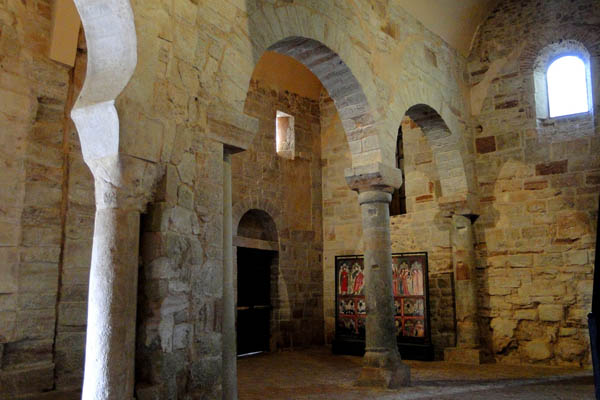 The Emilianenses Glosses are the first written evidence of the birth of a primitive Castilian language. They are annotations to the margin written next to texts in Latin where a monk uses these annotations (or glosses) to understand the grammar and to clarify the meanings.

Romance, language of these annotations that were found, make this document the first proof that the people expressed themselves in a language that was far from Latin. A primitive Castilian was born.

These Glosses also have the added interest of including two annotations in Basque, this being the first known written testimony of this language. 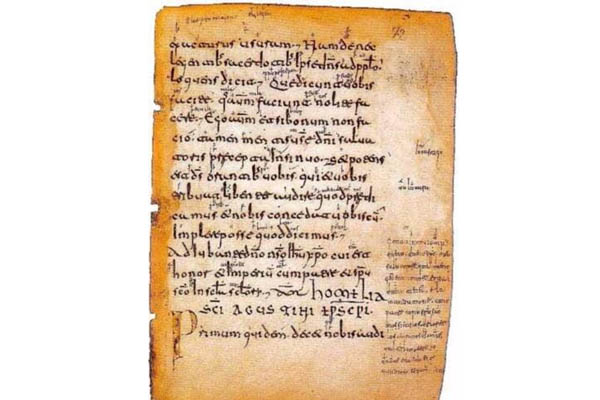 The figure of Gonzalo de Berceo is key in the history of Castilian. He was the first poet in the Spanish language with a well-known name. He was a clergyman and lived in the Monastery of San Millán de la Cogolla, where he was ordained a priest, and in that of Santo Domingo de Silos. He is the first representative of the so-called “mester of clergy”, medieval school of men of letters (a qualification that at that time almost coincided with that of priest) whose main contribution was the dissemination of Latin culture. Berceo inaugurated the path of erudite poetry, in contrast to that developed by popular epic poetry and that of the minstrels.

His works, written in cuaderna via (stanza of four verses alejandrinos monorrimos) as was usual in the «mester», are strictly religious and are usually classified into three groups: lives of saints, Marian works and works of a wider religious theme, of doctrinal type.

DISCOVER THE MONASTERIES IN THE GALLERY


This website uses cookies to improve your experience while you navigate through the website. Out of these, the cookies that are categorized as necessary are stored on your browser as they are essential for the working of basic functionalities of the website. We also use third-party cookies that help us analyze and understand how you use this website. These cookies will be stored in your browser only with your consent. You also have the option to opt-out of these cookies. But opting out of some of these cookies may affect your browsing experience.
Necessary Always Enabled
Necessary cookies are absolutely essential for the website to function properly. This category only includes cookies that ensures basic functionalities and security features of the website. These cookies do not store any personal information.
Non-necessary
Any cookies that may not be particularly necessary for the website to function and is used specifically to collect user personal data via analytics, ads, other embedded contents are termed as non-necessary cookies. It is mandatory to procure user consent prior to running these cookies on your website.
SAVE & ACCEPT